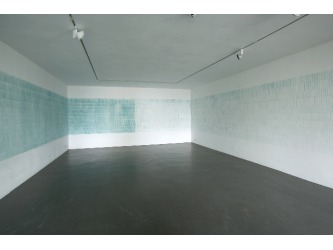 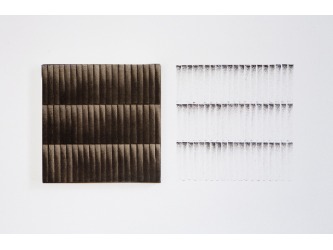 Red Earth (displaced wall drawing) is a large scale wall drawing developed as part of a series of drawings made from materials associated with the location in which a particular work is made. English Red Earth related to the obliterated medieval wall painting schemes in Gloucester Cathedral, the pigment was mined by the artist from an ancient iron ore mine near by.  Salt green - (displacement) was made using a pigment derived from copper minerals found in a deep coastal mine in Cornwall, and most recently Brick Lane, used soot (lamp Black) to develop an object/shadow relationship. Formal characteristics of individual works are informed by the spaces in which they are enacted. The introduction of the drawing material into the space is the first ‘act’ of dis – location.
This project has been initiated by identifying, locating and processing a red iron oxide pigment from Torres Novas, Portugal. The red earth, once ‘placed’ in the space as an even ground to an area of one wall is systematically erased from the ‘source’ wall and re-located to the other side of the space mark by mark with a rubber.

The intention to ‘re-locate’ the material exposes the work to a deconstructive process - the ‘un-drawn’ or erased mark is re-drawn or deposited to establish a self determining dynamic of presence/absence, mute/sound, structure/void, resistance/release, and, as the hand attempts to undermine the head, a tension between perfection and imperfection. Thus, duality is embedded within the drawing process so that the activity of drawing is itself an integrated temporal expression of opposition. One side (re)forms as a positive, the other its negative shadow. The towing and froing between locations suggests an articulation of the architectural dynamics of space. An attempt at navigating the work by the viewer is compromised by the criss-cross motion of the artist.  Residue, accident and disruption are caused as the work splits apart.

These works present an enquiry into associations of ‘place’, defined by the dynamic between location/dislocation, the multiple dualities therein, and with associated questions that arise around landscape, history and identity.