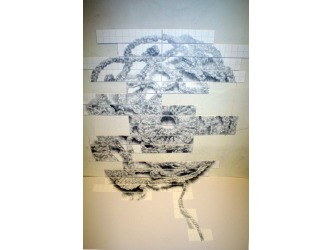 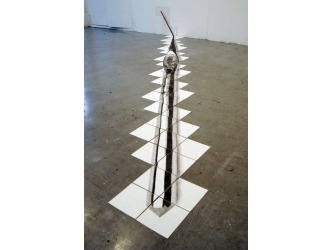 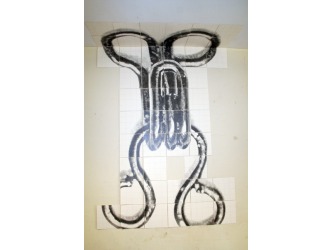 Value-less, Meaning-less is a project developed by Teresa Carneiro in collaboration with Nuno Neves, Luís Gomes, Inês Marques, Luís Almeida and students from FBAUL, Ar.Co, IADE and the Faculty of Architecture, from the 8th of October to the 2nd of November 2008, at Fábrica Braço de Prata.

Value-less, Meaning-less involves an exhibition of works by the artist, and an open residency taking place between the 8th and the 15th of October. During this period, the public will be able to access the space and follow the collective production of a drawing (Wed. – Sun., 18 – 23h), and participate in daily conversations with the participant artists about the working process (20 – 20.40h). Accompanying this project, there will also be a conversation with the artist on the 19th of October, 19 – 20h, and an open invitation to the public to participate in a collective drawing on the 12th and 19th of October, 16 – 19h.

By fragmenting an image of a ‘small’ and ‘insignificant’ thing, and then enlarging one by one its multiple details, Teresa Carneiro uses a drawing process that slows down and deconstructs structures that configure particular things as ‘value-less’ or ‘meaning-less’. This process begins therefore with a fragmentation of the image which then gives access to the ‘opening of the form’, an expression by Jean-Luc Nancy. For some years, Teresa Carneiro has been producing large scale drawings of a button, a crochet needle, or a drawing pin, where scale acts as a demystifying device allowing to question and to give evidence to the constitution of particular systems of values. What kind of limits might become flexible and blurred, what kind of values might be newly discovered and intensified, what kind of adjustment of visibilities might be operated by de-multiplying, for example, the details of a drawing pin into a 3 meters drawing? The almost exaggerated attention and concentration placed on the multiple details of an everyday small thing, forces to a certain delay which resists to more immediate perceptions. The opening to this new sensible space corresponds therefore to a new temporal order which suspends the imposition of archetypal significations. According to John Berger, in order to penetrate, or ‘to create such immense space (...) one has to know oneself to be very small’. The scale translates therefore a sensible mode of positioning oneself into the world which is simultaneously physical and conceptual. The drawing, on its turn, opens to an adjustment of judgements that allows to discover and to gain consciousness of new values which belong to an internal nature. In this way, the drawing does not serve primarily to ‘form’, but to express this opening – this establishes the economies of drawing which, on the other hand, result on its ‘smallness’ or ‘value-less’ constitution as an ‘artistic object’.

During this residency a group of artists will participate in the production of one of these large scale drawings made from an image of a small and insignificant thing. Firstly, the image will be fragmented, and then distributed by the various participants who will be responsible for the singular activity of drawing each detail. This project aims therefore to take the resistance to form to an extreme, by opening to and immense sensible space enlarged by the operations of various agents.