_ THE MATTER OF LANDSCAPES
Drawing landscapes with charcoal 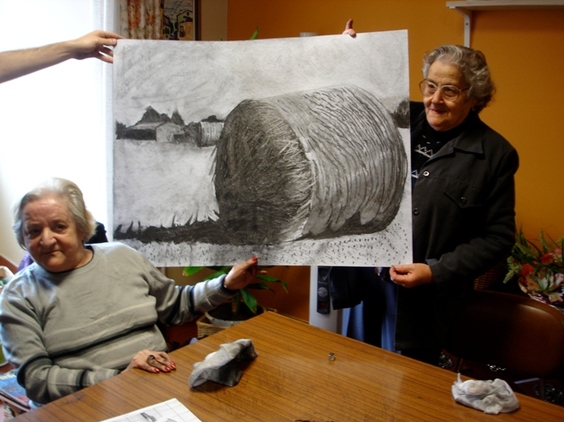 Guida Casella is a practice based researcher/artist whose work is based on the field of Archaeology. In March 2010 she developed a one month drawing residency at Drawing Spaces on the theme Timeline_The time of drawing to explore drawing methods in archaeological drawing in their own expressive and aesthetical values, most of the time less relevant when reading the findings resultant from such kind of drawings in scientific research. This is a short description of Guida Casella’s project which helps to provide background for understanding the ways in which drawing was being approached in the workshop The matter of landscapes:
“(…) Guida Casella, working in Archaeology, professionally producing scientific illustrations, handles very old objects. They can be 3000 yrs old pottery, or 800 yrs old tombs. These objects hold in themselves the passage of time. (…)
[According to the artist, the aim of her residency project was to explore:]
...that unveils the amaze of seeing something new. Something of an artifact in itself (a drawing as an artifact) based in an old artifact now exposed to the artist eye and hand.” (Guida Casella)
As already referred The matter of landscapes was a workshop based on some simple archaeological drawing strategies which Guida Casella was using at the time of her residency at Drawing Spaces. As an artist drawing for archaeological research, among various other strategies, Guida Casella uses grids and measuring methods to produce her own drawings.
The approach to this activity was to use grid systems to facilitate the enlargement of images of landscapes which were used as reference for this drawing activity.
The use of vegetal charcoal was carefully chosen as the medium for producing drawings of landscapes for being something familiar to the participants, enabling them to relate more easily to the materials- both subject and working tools – in terms of its matter. The most immediate example was the use of charcoal for making fires in the winter and for cooking purposes, but participants also related to charcoal in terms of its medical uses among other things. Therefore the choice of this medium allowed connecting the proposed drawing material to the theme of the workshop – The matter of landscapes. While this might have been something that created some expectation on the results, the focus on charcoal as matter allowed the participants to feel the material as if they were building and feeling the landscapes, through touch, with their own hands and fingers while producing the drawings.

The main objectives in this workshop were for participants to:


VALUE FOR PARTICIPANTS
Participants used the first part of the workshop to overcome initial resistances to the activity of drawing as well as to using their hands to directly interact with the material.
The first group discussion encouraged participants to interact with each other more than usually in their daily lives and activities at Mansão D. Pedro IV, and to talk about some of their memories which were enacted by each other’s drawings.
As a result, participants were then able to interact more confidently and productively in the later group work. They responded more strongly and actively as the workshop progressed and soon were very concentrated and motivated in producing collective enlarged drawings.
At the end of the session, when the bigger drawings were hanged on the walls of the institution, one could note very clearly how proud participants felt in their achievement. This workshop showed to be key in perceiving the ways in which participants can become empowered through drawing activities. Participants stated they felt both surprised with their achievements and very proud of their final work. The positive reaction to the workshop was also felt when participants asked the facilitators to take pictures of each group in front of their final works and then also of the facilitators with the groups with which they collaborated with in front of the works.

VALUE FOR FACILITATORS
Working with elder people was an extremely rich experience for facilitators.
Even if this people live together in an institution, they tend to be isolated in their own personal world and personal routines. So to begin with, it wasn’t straightforward how to gain the participants’ trust and will to engaging in the project. To start by taking about familiar subjects, such as landscapes and charcoal and asking how participants related to these subjects through their memories showed to be extremely helpful in terms of starting to gain people’s interest in the proposed activity. Facilitators learned that sometimes it is easier to engage participants in an activity by asking them to immediately make something, but in other cases, such as that of this workshop, participants need to be listened too and facilitators need to find ways of gaining their trust and interest through the most adequate strategies.
For the participants it was also a very enriching experience to sense how this activity provided the participants with a huge sense of self-esteem, pride, empowerment, and acknowledgement of the importance of others in functioning as a group. 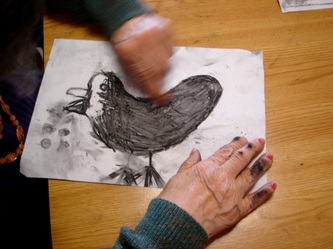 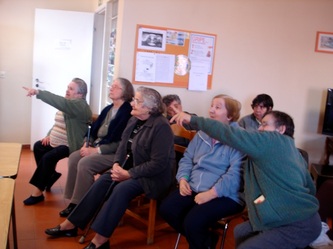 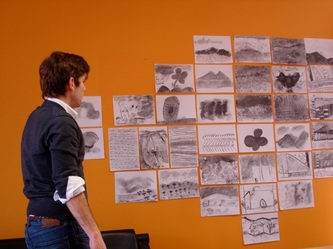 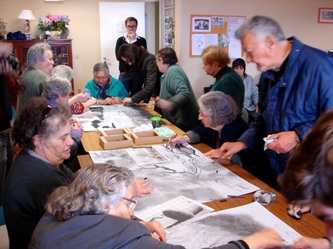 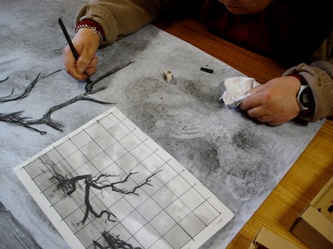 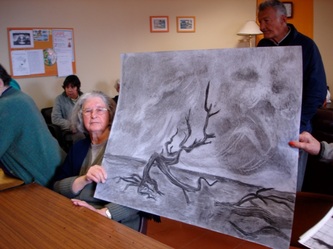 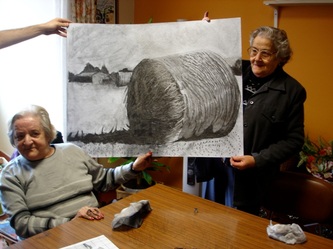 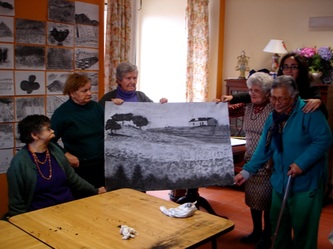 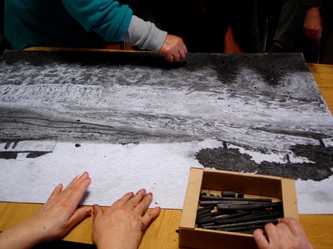 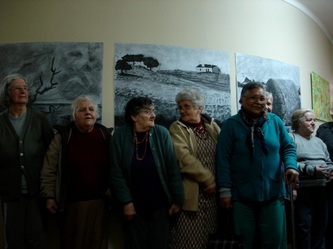 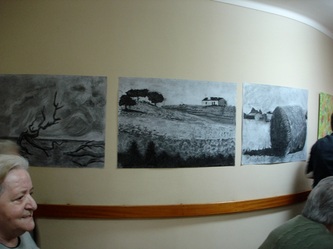 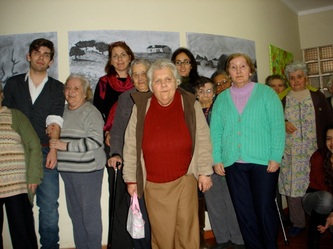