WORKSHOP Developed as a response to the project
‘It is forbidden to draw on paper!’ by pedro janeiro
(artist residency which took place at Drawing Spaces during May/April 2011) 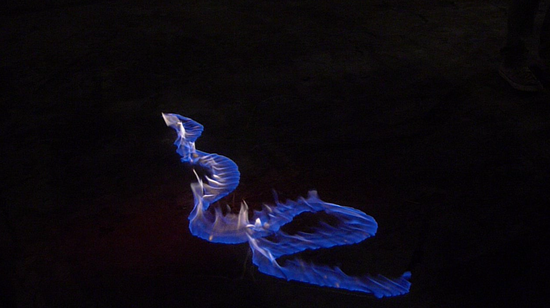 WHAT
A workshops proposing to use fire to draw at night and in a dark room using long exposures made through a photographic camera as well as a video camera to register the gestures and movements in drawings made in space and time.

ADULT LEARNERS
18 young Female and Male adults, with an age range between 19 and 25 years old.
(This workshop was open to anyone)

WHY
Pedro Janeiro’s personal research on “drawing outside the paper” was the motto for his Artistic Residency at Drawing Spaces. His personal artistic work at the point when this activity took place was based on making drawings on three-dimensional surfaces, such as his or other people’s hands or parts of the body. Hence, this activity was part of a series of 4 workshops that took place during the residency which were proposed to the public and oriented by the artist in residency and focused on drawing on ‘surfaces’ other than paper.

Drawing with Fire was a workshop proposing to explore the movement of fire and its ‘time span’, through lines and shapes previously drawn on the floor with invisible flammable materials such as alcohol and burning substances and then making the drawings ‘alive’ by setting on fire the flaming substances and allowing the burning process to take a role ‘on its own’ in the creative process. The purpose of this activity was also to draw in space and time with less controllable mediums and tools allowing the participants to explore in a more conscious way the expressive properties of more ephemeral materials while used in drawing.

HOW
This activity took place outdoors, in the backyard of Drawing Spaces at Fábrica Barço de Prata and at the back room of Drawing Spaces which was totally blacked out to enable the capturing of images and movement through long photographic exposures and through a digital camera. The long photographic exposures were used to ‘fix’ and materialize the images produced in space and time while the digital camera was used to capture the movement of drawing over time and in space.

1. After providing a short description to the participants of the overall project of Drawing Spaces, Pedro Janeiro, the artist in residency, introduced his plan for the workshop in relation to his residency at Drawing Spaces.
2. Participants were first taken outdoors, to the backyard of Drawing Spaces at Fábrica Braço de Prata, where they set up on tripods both the photographic camera and the video camera to produce still and moving images from the drawings with fire. Then, with the help of facilitators, participants made some tests to define times of exposure for the photographic camera to capture some fractions of the fire drawings.
3. Pedro Gonçalves was the facilitator responsible for filming the fire drawings and for controlling the exposures of the digital camera while enabling the participants to engage in this part of the process.
4. Flammable substances were made available to the participants after providing them with some health and safety rules for the use of these substances
5. To start with, the participants were asked to carefully lay on the floor the liquid substances through simple and controlled gestures producing line movements.
6. The liquid substances were then carefully set on fire and images were captured through long photographic exposures and short videos.
7. After each exposure or short video, people gathered around the digital photographic or video camera to see and analyse the resultant still or moving image captured on screen. This was quite important as a strategy of the activity as it enabled the participants to continually see and analyse the results of their gestures and movements and start to become more conscious and controlling of their drawing actions and also more aware of the expressive potential of the material (fire) on its own.
8. Some drawing approaches by the participants:
Silhouette drawings
‘Doodle’ drawings coming out of holes in the ground
Spiral drawings
Snake shapes
Etc.
9. For the second part of this workshop participants were taken to the darkened room at Drawing Spaces, and set up on tripods both the photographic camera and the video camera to produce still and moving images from smaller and more contained drawings still produced fire.
10. This time drawings were produced with cigarettes, cigarette lights, and by setting on fire some small pieces of thread. The aim was to draw with the simplest possible resources, as the environment needed to be more controlled.
11. The analysis and control of actions were done as in the first part of the session, by observing the fixation of images in the photographic screen after each long exposure and the captured movements in the video camera.
12. For the last part of the workshop, everyone gathered to see the results of works on the screens as a sequence of images and films, and participants and facilitators engaged on a final discussion about techniques, actions, effects and results, and also on the experience of drawing in space over time with fire.

VALUE FOR LEARNERS
One of the values of this workshop was to free the participants from conventional drawing. Group interaction was also an important part of the proposed activities.
The workshop also worked as a way of encouraging learners to focus on the actions of drawing, such as by controlling and enabling the fire to move across the alcohol lines while trying to capture it through photography and video images.
In comparison with the previous workshop, under the theme Drawing with light, where drawings were produced through movements with different colour lamps, participants engaged in this workshop with more enthusiasm and will to participate. It seemed that working with a sort of dangerous material created some sort of excitement among the participants making them respond more immediately to the activity.

VALUE FOR THE FACILITATORS
Facilitators gain more experience in making people feel comfortable with drawing in unconventional surfaces and ways. Through this workshop, the facilitator was also able to fully explore their role in terms of providing a good but controlled workflow, moments to pause, discussion and critique.
Having a couple of facilitators was finally very helpful for this particular workshop as they helped to control the experiences with safety, while allowing the participants to enjoy the playfulness and expressiveness of drawing with fire in space and time. 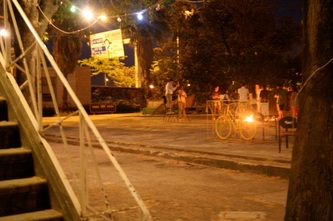 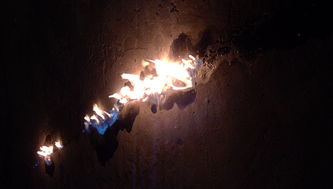 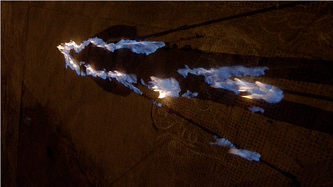 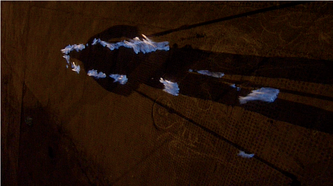 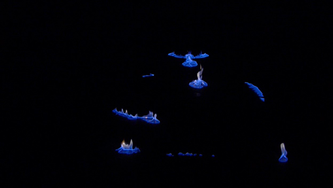 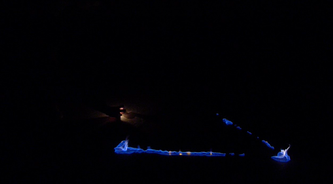 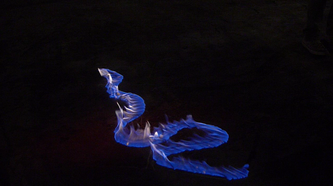