_ Drawing with chalk on fixed surfaces (ground, trees, walls)
WORKSHOP Developed as a response to the project
‘It is forbidden to draw on paper!’ by pedro janeiro
(artist residency which took place at Drawing Spaces during May/April 2011) 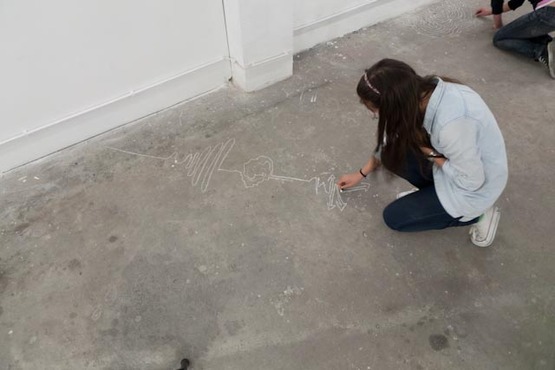 WHAT
A drawing workshop proposing to use chalk to draw on surfaces other than the paper: ground, walls, trees, leaves, people’s bodies, stones, waste, etc.

ADULT LEARNERS
19 young Female and Male adults, with an age range between 19 and 30 years old.
(This workshop was open to anyone)

WHY
Pedro Janeiro’s personal research on “drawing outside the paper” was the motto for his Artistic Residency at Drawing Spaces. His personal artistic work at that point was based on making drawings on three-dimensional surfaces, like on his or other people’s hands or parts of the body.
Hence, this activity was part of a series of 4 workshops that took place during the residency which were proposed to the public and oriented by the artist in residency, and focused on drawing on ‘surfaces’ other than paper.

Drawing with Chalk on different surfaces was one of such ways to explore drawing on new supports, and in this particular session, in places surrounding people’s presence and where people circulated. This was a strategy to call into attention how one marks one’s own presence in a space and may affect and change it through his movements and circulation. Drawing on such surfaces materialized this awareness thus making it more conscious to the participants. The aim of this session was also to explore new surfaces to interact with through drawing, in terms of texture, but also in terms of three dimensionality.

HOW
1. At beginning of the session, when there was still natural light on the outside, the backyard and large parking space of Drawingspaces at Fábrica do Braço de Prata, was used as ‘background’ to search for surfaces where to draw.
2. After providing a short description to the participants of the overall project of Drawing Spaces, Pedro Janeiro, the artist in residency, introduced his plan for the workshop in relation to his residency at Drawing Spaces. Examples of possible surfaces were people could draw and ways to explore them were provided. This was also argued in relation to space, place and the presence of bodies and their occupations and interaction with space.
3. Different colour pieces of chalk were made available to the participants.
4. The participants were then invited to look for and explore different surfaces to draw and the ways their bodies related to these actions. Facilitators collaborated on this search along with the participants while discussing and recording the participants’ choices and modes of interventions. The possibility of working in groups or pairs was also left in open to the participants. Some approaches by the participants:

a. Drawings on the trees, responding to their textures and shapes
b. Drawing on found objects
c. Tracing shadows on the ground or wall – of bodies, objects (lamps, chairs, etc.), and elements in the space
d. Responding to stains or textures (regular or irregular) on the floor or walls, continuing or interacting with their shapes or textures while appropriating them into new expressive meanings
e. Drawing on each other’s bodies and clothes

5. The second part of the session took place indoors, inside Drawing Spaces. This time it was proposed to the participants to produce a large collective drawing on the ground of the studio space, each starting individually on one limit of the space and then moving collectively to the centre where all interventions met and became connected. Before starting this drawing participants discussed with the facilitators where they would like to start their drawings and which kind of mark making they could produce, so that the collective drawing could have some sort of organized articulation.
6. The last part of the session was dedicated to an informal discussion of the activity. Participants and facilitators went around a brief ‘tour’ to look at the drawings that were produced during the session while discussing the choices and use of surfaces,  techniques, effects and results.
7. Pedro Gonçalves and Ivo Covaneiro were the facilitators in charge of registering the results with digital cameras which were also used for the discussion at the end of the session (while looking at images through the screen of the cameras).

VALUE FOR LEARNERS
Participants were encouraged to free themselves from conventions associated to drawings produced on paper, such as: the limits imposed by paper formats; use of techniques limited by the surface of the paper, but also by historical or academic conventions such as how a drawing on paper should look like; portability of works, and its social purposes and uses, such as being displayed on a wall after its making, or going to a gallery or to the art marked to be ‘valued’ and sold. With such type of exercises one is encouraged to a certain amount of generosity to give away his/her drawing to the environment. On the other hand the participants became much more aware of their presence in a place by the marks they consciously produced through their occupations and movements in space. And also how this way of mark making produced direct relations between one’s body and real space, but also how it enacted conscious relations between different bodies sharing a common place. Hence participants focused on the action of drawing, more than on the final results. Through this, participants clearly enjoyed more freely the making of drawings, the relationships between the participant’s body in space and in terms of its interaction in group.

VALUE FOR THE FACILITATORS
Facilitators were able to try out and gain experience in ways of making people feel comfortable while drawing in unconventional surfaces through less traditional modes of drawing. This was also a good opportunity to understand the role of the facilitator as a provider of a good workflow, managing moments for providing information, pausing, discussing, encouraging individual exploration and collaboration, by including themselves also in the activities. On the other hand, this session provided also the facilitator with the opportunity to engage in the critique of work as a healthy and constructive shared moment between facilitators and participants. 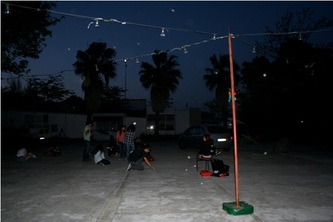 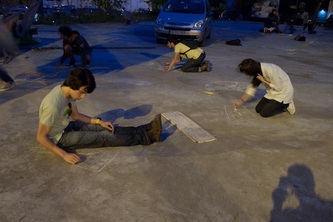 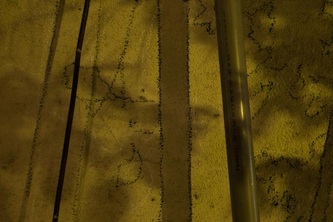 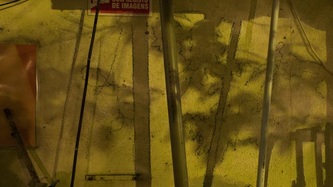 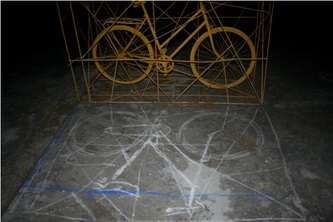 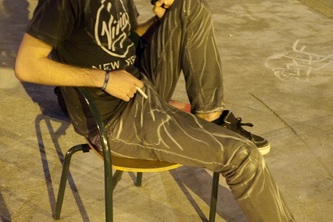 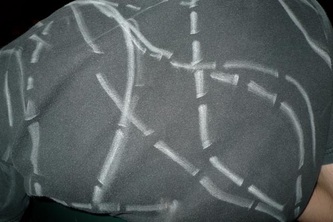 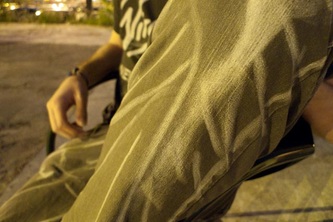 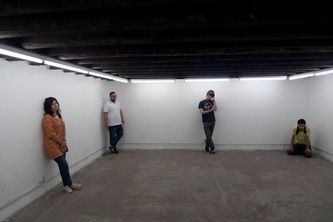 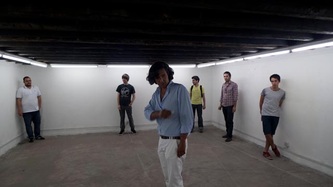 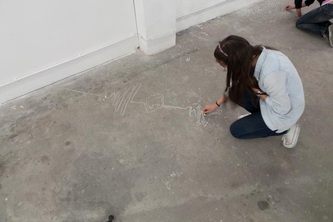 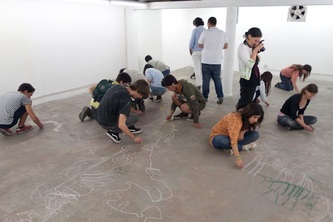 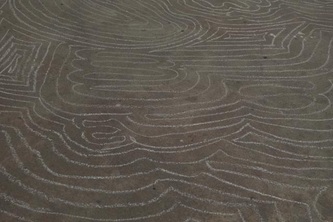 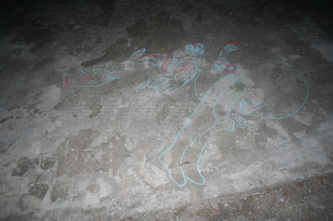