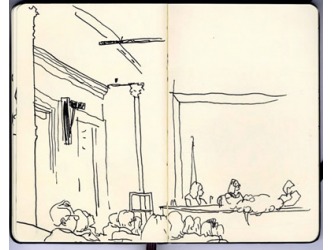 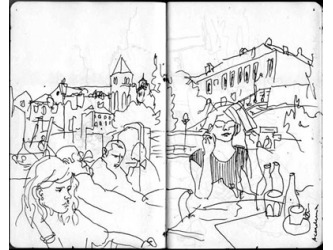 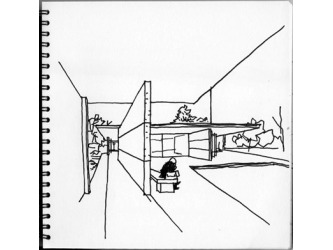 In the copy that he gave me of his book “Desenhos de Viagem”1, Daciano da Costa2 wrote:
“Like the transmission of a token, so that it stays registered”.
He expressed this wish a few years ago and I’ve been waiting since then for the opportunity to publish a book like this as part of the token.
One of central ideas that Daciano related to drawing was the one of perceptiveness. A perceptive drawing places the maker inside the events, the spaces. The maker is an actor and a spectator at the same time. A designer or architect adopts this position because he or she is ethically compelled to transform the world so; he or she must understand the world being in the world.
(…)
During a research project that investigated precisely the role of Drawing in the constitution of the first community of artists that entitled themselves to be called “Designers” in Portugal, (Daciano’s generation) I was invited by Teresa Carneiro and Luís Filipe Gomes to participate in “Drawing Spaces” an event running from October 2008 to September 2009 at Fábrica de Braço de Prata, a Cultural Centre in Lisbon, with a solo exhibition of my sketchbooks. The idea of gathering the development of that research to this type of continuing drawing research within my own work was very interesting. The research scope was therefore enhanced to reach a kind of drawing, made with a direct line, which descended directly from the legacy of Frederico George and Daciano da Costa.
(…)
The book reveals a small part of all the drawings made in voyages, whilst the exhibition, contains also “domestic” ones. Although they are presented in an almost similar number, the travel drawings are probably more exemplary of the kind of perceptiveness mentioned above since most of the places were seen for the first time when drawn.
(…)
I try to make drawings that disappear in favour of what I’m drawing.
(…)
The place and the fact of being there are the important thing. Similitude with the site is the reward. The site is encountered as “things that are” and only if it is quite well imitated it will be possible to make it become “a thing that others say that is”.
(…)
This kind of ‘erasure’ in drawing corresponds also to a complete connection with what is being drawn. All senses must be involved in drawing. I do not endorse the creation of a soundtrack for the occasion by using one of those apparatuses that make music enter directly through headphones into your brain. The score must be encountered in the “music” of the place, from the roar of a vaporetto to the loud voices of girls dancing in the Piazzeta.
(…)
Those who seek excuses for not drawing (frequently my students) refer the possibility of “other people” noticing that they are being drawn or simply that someone acknowledged that someone is drawing. I can say with almost total certainty that rarely people think that someone scribbling in a notebook is making a drawing (that is why it is advisable to use discrete instruments, normally destined for writing). Also, the huge majority of people who discover that someone is drawing do not engage in conversation and if they do, they usually are nice and even give good advice. Once, in Venice, a German lady advised me to use a silver point pen. A few days later, in Vicenza, an Italian lady advised me to use a crayon. Both thought that by using these materials I would improve my drawings. Today, I think they were right about the drawings. But the sites would be ruined by such exquisite utensils.
(…)
But remember that the less important thing in travel drawings is indisputably the drawing displayed in the paper. If such drawing was to be considered the most important thing, the travel would be ruined. Making the drawing there is the important thing. (Eduardo Côrte-Real)