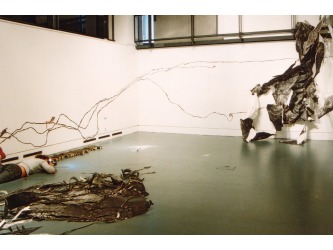 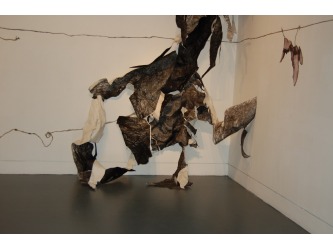 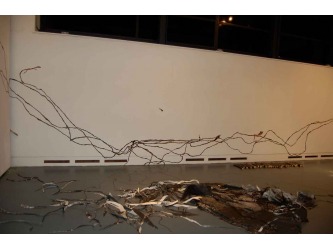 Both Cordelia and Aileen use the events of everyday life as catalysts for their practice. The idea for this project arose out of a series of conversations over the last four years about why and how to draw. The discussion was focused by the installation ‘Drawing undone’ in 2007, which investigated ideas of pure versus corrupt drawing practices. This stimulated further questions about process and how emergent thought manifests itself through strategized technique. The differences between our practices lend themselves well to this research.

……….the innocent Stevie, seated very good and quiet at a deal table, drawing circles, circles; innumerable circles, concentric, eccentric; a coruscating whirl of circles that by their tangled multitude of repeated curves, uniformity of form, and confusion of intersecting lines suggested a rendering of cosmic chaos, the symbolism of a mad art attempting the inconceivable. The artist never turned his head; and in all his soul's application to the task his back quivered, his thin neck, sunk into a deep hollow at the base of the skull, seemed ready to snap.

We will investigate the idea of the knowing and unknowing drawing. In practice this will involve trying the possibilities of extended versus compacted time and content in line and the relationship between the drawn line and the body as contained in interior and between exterior architectural space. We will begin by working separately on the same theme creating a dialectic which may or may not work its way into each other's line and space.

The lines of Aileen’s drawing undermine any possible intent. They have succumbed to the randomness of enforced and imprecise repetition. The first touch is what matters, mapping a pattern of movement of thought. There is no content that can take a firm hold, but a gathering rhythm. Time unfolds like a slow stutter, an impatient reiteration of the same moment: now and here.  Cordelia’s method of drawing by pasting collaged line directly onto a wall appears to operate from completely different principles. The cut line in this context draws out the space between things, unravels the intimacy of the drawn line with banal detail delivered in sliced fragments. However, since this line is drawn around the entire room it demands movement which similarly draws the body and it’s rhythms into how we see it. It is the result of a gesture that is not within arm’s reach, but flung out. As with Aileen’s graphite line the paper line does not describe an edge, but is a trail across a surface that is brought into being by the line itself. The cut paper behind it historicizes its appearance, a distance created by unequivocal hard edged line. The ‘straight’ collaged line disengages the planes of the wall from its structural credibility. The paper pasted onto its surface as if it were a picture plane without edges, ignores existing angles and creates the illusion of new ones.

The juxtaposition of these ‘forms’ of line does not hope for a truly integrated reading, but demonstrates stark differences in drawing on space. The space that is drawn on and  out by these lines relates the perceiving body differently: (one as individual and the other as social).The hand drawn graphite line exists as an unmediated trace of touch, the cut poster transforms beyond recognition what was already an image alienated by it’s commercial format and message. The graphite mark is the result of a single event of hand to paper; the collaged line is produced from a reproduction of a photographic print. The first is a line which negotiates space via an intimate relation to the body; the second belongs to an eye that is part of a pedestrian body walking through architecture.

Aileen’s drawings seem to declare a surrendered relationship to material dictated by its limitations. However this manifest materiality comes out of an opposite strategy: perversely chosen techniques which involve the paths of most resistance. The how of this drawing is glaringly evident in all its stages. Cornelia’s drawing transforms the source material, scissors slickly disguise the signifying properties of the initial imagery and invents events for the line.

Charcoal, graphite, advertising posters, previous drawings, scissors, scalpels, wallpaper paste. The work will be documented using digital camera – resulting images will be absorbed into the fabric of the drawing as the work progresses.